The Artist-in-Residence programme brings a different dimension to Visual Arts classes at Melbourne Grammar School. While all Visual Arts teachers are also practicing artists in their own right, the injection of new ideas increases the likelihood that students will discover a visual language that particularly resonates with them.

Each campus invites artists to work with their students each year and pass on their expertise and wisdom, as well as provide a first-hand demonstration of artistic professional practice. Visits normally include the production of a major art installation or exhibition.

In addition to students benefitting by directly engaging with an artist ‘at work’, the artists have the opportunity to learn themselves, through the energy, bounce and questions of the students. It is a very powerful learning model.

This year, the Artist-in-Residence projects have produced three outstanding artworks.

An apparently unprepossessing external wall at Grimwade House has been transformed into an inspirational landmark through a collaboration between community artist, Brett Ashby, and Year 6 students. 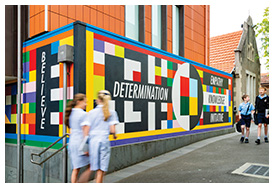 Facing the Year 5 and 6 classroom area, the artwork was designed by Brett based on the colours, shape, font and words nominated by students during a structured workshop, then painted by Brett and the students.

“I was interested in hearing the voice of students and gaining local ownership of the artwork,” explains Brett. “It was important students were able to link the creative solution to the space and place, and that it had relevance for them.”

“When students walk past the words, hopefully they will mean something to students in the further and it will cause them to reflect what the words mean to them,” says Year 6 student, Ned.

“I am so impressed with the final artwork,” says Ms Lee-Anne D’Paul, Head of Visual Art at Grimwade House. “The boldness of the piece is eye catching and the words are very current from an educational standpoint. The combination of visual and written languages reminds students that both are valid ways to express ideas, and both have merit.”

For many students, it is the longevity of the installation that is important to them. “I really enjoyed being able to paint the mural and to know that when I come back to Grimwade House one day that I helped create this lovely piece of artwork,” says Year 6 student, Sia.

“We wanted to create an exhibition which had an overwhelming sense about it, so we decided to build a whole city,” says Callum Preston, Artist-in-Residence at Wadhurst during 2019. And build a whole city they did.

Named ‘The new Wadhurst city’, Year 7 and 8 students have created a landscape which is not bound by conventional town planning rules, or by time, place or culture, and the result is magnificent. It includes a dam with flowing water, six sporting stadiums of varying size, amusement parks with moving rides, public art, construction ‘in progress’ and a town hall. There are many fantasy pieces as well. 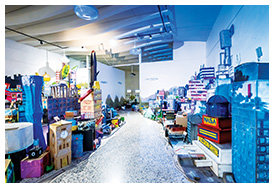 “Many different ideas arose during the planning stages,” according to Mr Chris Drummond, Head of Visual Art at Wadhurst. “For example, one student raised the idea that a city might represent a set of values. Others focused on a particular theme.”

For Year 8 students, Henry Sibly and Andrew Smith, it was an opportunity to tap into their personal interests. “I love the Richmond FC and fishing,” says Henry. “I built the Punt Road training grounds, but I put a lake in the middle instead of the grassed oval. I added a jetty and some Brighton beach bathing boxes as well.”

Together with Oscar O’Meara, Andrew created a working train line which travels around and through other buildings. It also includes two stations.

“We tried to let students find their place in the project,” explains Callum. “Some had an artistic focus, others were more interested in infrastructure or technological aspects. We tried to give them the opportunity to ‘choose their own adventure’. It was great to see where their brains led them.”

“We also wanted students to appreciate the value of working collaboratively on a large-scale endeavour where each person’s work elevates the others as they all contribute to the whole,” he added.

The Metro Tunnel constructions taking place near the Senior School has welcomed an exciting project for Visual Communication and Art students.

Working alongside two artists, students were tasked by the Metro Tunnel programme to create vibrant and dynamic artwork that would be showcased along hoardings near the School.

In line with the theme of storytelling, the artwork needed to consider the past, present and future of the School’s local surroundings.

Year 10 Visual Communication students worked with urban artist, Tom Gerrard, to portray the progression of public transport from the early days of steam trains through to futuristic trains. After drawing platforms, trains and commuters by hand, designs were digitally transformed and pieced together.

Following a similar creative process, Year 11 Art students worked with artist and illustrator, Michael Fikaris, in creating abstract shapes to represent the evolution of flora and fauna in the Royal Botanic Gardens.

Students have appreciated the shared collaboration with both artists, from ideation right through to the execution. “My confidence in design has grown a great deal during this project,” says Year 10 student, Tom Walker. “For me, having Tom Gerrard guide us through how best to use Adobe programmes has helped me develop significantly over the past term”.

Along with students, the artists have also achieved a sense of pride in this project. “I’ve never worked with a school before. I thought it would be challenging, but it’s been great to teach the boys the foundations like file management, working to your strengths and operating as designers do in an agency,” Tom Gerrard says. “The best part – seeing the growth from students and their skill set expand exponentially”.

Artworks will be in place along Domain Road and Dallas Brookes Drive over the coming months.