"We have traditionally celebrated the Children’s Book Council’s Book Week in August. However, this year we aim to synchronise author visits with units of work within the curriculum. Celebrated and educative people will work with Wadhurst students throughout the year,” says Ms Susan Robertson, Deputy Director of Library Services.

The Book Year concept was devised by Ms Robertson who also manages the activities within it.  “We are responding to the general capabilities section of the Australian Curriculum,” she explains. “Literature, or story, is a wonderful vehicle to explore other cultures, other lives, other relationships and social historical views and values.  It not only has the potential to broaden one’s knowledge base, but it deepens one’s understanding of humanity and enriches one’s life.”

Brian Nankervis agrees that literature can be enriching. “Poetry, like all forms of the written word, is another way of expressing yourself, says Brian. “When trying to write a great poem, you have to isolate emotions and key words, and try to capture a story in a succinct way.  It can be difficult but liberating, and sometimes fun as well. The boys seemed to relish the challenge.”

Brian visited each Year 8 English class and asked the students to write two diverse pieces of poetry – one of just three lines and another more serious reflection on an early memory.

A visit by noted Australian author, John Marsden, coincided with the study of his book ‘Tomorrow when the war began’ in Year 8 English classes.  John participated in a student led Q & A session in which questions focused on how John became an author, inspiration for his books, editorial censorship, and more.

“Being able to meet the author added a new dimension to our study of ‘Tomorrow When the War Began’, allowing us to understand some of his thoughts and motivation behind writing the story,” says Year 8 student, William Anderson-Nunn. “His presentation has also given us new insights into the thought processes of a fictional novelist. He was very ‘down to earth’ and he explained how he based the central character on one of his real-life students, and how his inspiration for the series came unexpectedly one day.”

John has visited the School several times. He enjoyed the interaction with the group. “There is a sense of intellectual curiosity that is very strong amongst the students here at Melbourne Grammar,” he says. “They always ask probing and searching questions; they move beyond the superficial.” 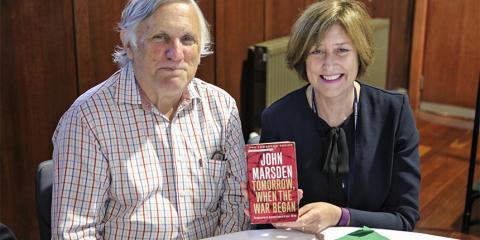 “The value of meeting an author is that you learn about language, writing, and communication,” adds John. “Given that language is the most powerful tool that human beings have, anything that helps you become more fluent, more confident, and more articulate is going to be incredibly worthwhile.”

John is proud to note that his father and uncle both attended Melbourne Grammar School. (John was raised in Sydney and attended school there.)

“Interaction with the author of the book they are studying offers students an opportunity to gain a real depth of understanding of both the writing process and the ideas underpinning the piece of literature itself,” says Ms Robertson.