Continuing connections to the School 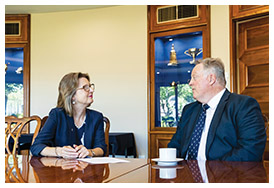 Mr Simon Derham (OM 1973) recently chose to support the School by leaving a bequest in his Will. Director of Development, Ms Sue Felton, caught up with Simon to find out more about his reasons for doing so.

Sue: You have strong connections to Melbourne Grammar. Can you tell me about your family connections?

Simon: There were Derhams at Melbourne Grammar School in the 1880s and I believe there has been a Derham at the School in just about every decade since then. My father, George, his brother, Fred, and my grandfather, Charles, all went to Melbourne Grammar and, of course, one of my own sons has attended the School from Prep to Year 12, graduating this year. Whereas I was a ’12 year’ man, he is proud that he is a ’13 year’ man and, now, a fourth generation Old Melburnian.

Charles graduated from the School in 1903 and subsequently served on both The Old Melburnian’s Council and School Council. At least two of his brothers attended Melbourne Grammar, so on the Derham side of my family there are also great uncles, great cousins and their children who have also gone through the School.

I recently learnt that the Teague family, who are on my mother’s maternal side, also attended the School starting in the 1860s. So it is amazing to have such long standing ties to the School on both sides of the family.

Sue:  What other connections do you have to the School?

Simon: As a boy, my family would regularly holiday with family friends who had also gone to Melbourne Grammar.

Joining the Witherby Tower Society is a continuation of that connection.

Sue: Let me take you on a trip down memory lane for a while. What is your strongest memory of your time at the school?

Simon: There’s not one, there are a multitude. Perhaps most importantly, I remember the closeness and the camaraderie.  I go to the Old Melburnian Dinner with those with whom I caught the tram to School, rowed and served in the cadets.

I have great memories of the Central Australian trip in 1969, playing sport, particularly football and rowing, and the Head of the River regattas.

I also enjoyed every minute of the cadets from the parades, the camps and the shared experiences of army food, freezing nights sleeping on the ground and being exhausted.

Socially, I remember being press ganged into going to Boat Race dances in Third and Fourth Form and having a very mixed time!

Sue: You’ve recently chosen to leave a bequest to the School in your Will. What motivated you to do this?

Simon: I’ve done it because it’s something I believe you should do – if the School doesn’t keep on renewing itself, it cannot maintain relevance.

It was something that I was always going to do. There was never a question about it. It is just my way of making the School a better place for those who are yet to come.

If you are interested in supporting the School’s Annual Giving Appeal as an individual or collectively, or including a Gift to the School in your Will, please contact: