Year 6 student, Albert Chen, is an outstanding young Mathematician. Recently awarded an Honourable Mention at the Asia-Pacific Mathematical Olympiad for Primary Schools, Albert was one of 221 students from 15 countries invited to participate in the final round of the event and the only Australian entry to be recognised with an award this year.

There are two rounds in the Olympiad, both comprising extremely challenging two-hour examinations. The first is completed at school and, on the basis of those results, the very best ‘junior’ mathematical minds from across Asia-Pacific gain a place in a further round, which determines final rankings. A maximum of ten Australian students are invited to participate in the final round each year. This year, the final round and presentation ceremony, was held in Singapore. 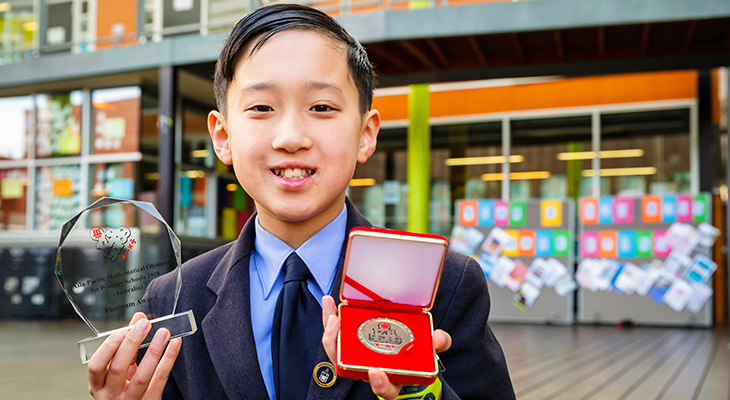 “I like maths. It feels satisfying when you work out an answer, particularly if it was challenging,” says Albert. “The Olympiad questions mostly involved problem solving, not just calculations. You needed to look at each question in a different way, using logic and unusual approaches.”

Participation in the Olympiad is one of many extension activities offered to very able students at Grimwade House. “Albert has achieved an exceptional outcome,” says Enrichment Co-ordinator, Ms Adrienne English. “His natural and learnt capabilities are complemented by a very strong work ethic. Albert completed numerous training exercises, here at School and at home, to prepare for each round of the Olympiad.”

“I was very excited to win the award,” adds Albert. “I found it very rewarding. I felt my hard work had paid off.”

Albert is only the second Grimwade House student to gain a place in the competition final. The other is Ben Solomon, currently in Year 11, who was also awarded an Honourable Mention in the Olympiad when he was in Year 6.

All articles     Next article