As keynote speaker at the 140th Old Melburnians Annual Dinner, Mr Simon McKeon AO (OM 1973), described himself as having been a “plodder” during his years at Melbourne Grammar. “I observed others in my year who were leading, doing things well beyond their years. I was not one of these students.” 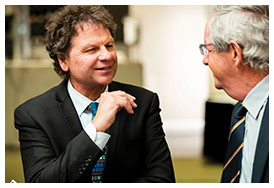 Today, Simon’s impressive portfolio of work includes roles as a leader at Macquarie Group, Chancellor of Monash University, a director at Rio Tinto, Chairman of AMP and CSIRO – the list goes on. Outside his professional achievements, he is Founding Chairman of MS Research Australia and was awarded Australian of the Year in 2011. But in speaking to fellow Old Melburnians, Simon spoke not of his successes, but of the ways in which giving to others has improved his life.

His first opportunity to be of service to others was not entirely welcome. Having established himself as a successful lawyer in Sydney, Simon suddenly had to move back to Melbourne to help with the care of his sister, who has a disability. “To be honest, I returned a very bitter person,” Simon says. “We were forced to sell our home and I had to turn away from my career.”

“But life works in interesting ways,” he told those assembled at the Dinner. “Rather than go back to a law firm in Melbourne, I was encouraged to join an investment bank – Macquarie Bank – for a year. Thirty five years later, I am still doing that one year.”

“My sister has no understanding of the extraordinary role she played in my life,” Simon continued. “It has been an enormous privilege to see one of Australia’s corporate success stories unfold from the inside and I wouldn’t have been part of that if I hadn’t returned to Melbourne for my sister.”

Simon’s next challenge was also entirely unexpected. “I was crossing the road one day and just went blind,” he explains. This temporary loss of vision led to the diagnosis of multiple sclerosis. “Again, I started off being bitter and twisted about the confounding condition,” he told the crowd. “But now I am incredibly grateful for it – grateful for what I call my near-death experience 20 years ago.”

Simon’s diagnosis led to his significant and purposeful time in the not-for-profit sector, an area where he feels there is an enormous choice in what to support. “Community need is everywhere,” he said. “I think it is okay to be ‘selfish’ and choose to help in an area that means something to you.”

“For giving to be sustained, we need it to mean something to us,” Simon added. “I think it’s also reasonable for us to have a sensible expectation of getting something back. Once you get the formula right, you realise there is no sacrifice in giving. The more you give, the more you receive.”