Pride and its consequences are ever the hallmark of arrogant rulers, something as true today as when Sophocles wrote his tragedy Antigone, this year’s Quad Play. Sophocles focusses on the hubris of King Creon, whose self-centred decrees flout the moral laws of society, and ironically see him destroy the very things he seeks to preserve – his pride, his reputation, and his family.

This production, directed by Sharon Mulready and assisted by Alison Brunton, brought an austere clarity to the play’s themes. A particular feature was the nuance and variety of the role of the eleven-strong Chorus, well-led by Jeremy Bolton. The Chorus moved well, and revelled in the fresh language of Seamus Heaney’s recent translation. 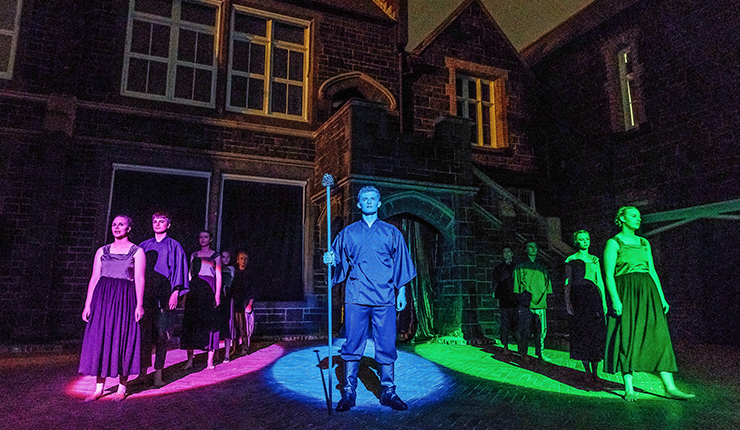 Austin Haynes brought a steely and imperious strut to Creon’s hypocrisy, brooking no dissent as he vainly seeks to maintain authority. MGGS student, Kirriley Bonnett, was likewise single-minded in her portrayal of Antigone, the woman who fights for justice, heedless of the cost. George Black brought great moral authority to the role of Tiresias, the blind prophet who sees more clearly than the King, and makes him admits his faults.

This was a fine production at all levels, from the well-balanced acting, to the attractive and effective costuming, and the always professional back-stage craft. One can only reflect on what fodder Sophocles would have in today’s society for his moral critiques of rulers.